One of the things that I miss the most about living by the ocean is fresh seafood -- and by fresh I mean caught on my dad's boat and eaten same day. It doesn't get much fresher than that... I remember when we were in Panama, often it wasn't productive to order off the menu (because they hadn't necessarily caught everything that day and thus, didn't have it), but rather was more productive to ask what they did have, also caught same day. I miss that a lot. I also really miss my friend Shina's spicy tuna, but that's a story for another day.

Today, while at Costco on a plan to get veggies, fruit and chicken, I inevitably spent $125, including a beautiful ahi steak and a container of mango peach salsa -- all natural and surprisingly low sodium -- among many other must-have purchases. Funny how that works. I immediately decided to make blackened ahi tacos with the mango salsa, but mistakenly thought I had tortillas at home, so I decided to use tortilla chips instead, an awesome decision.

I withheld about 3 oz of tuna steak to make spicy tuna, which is now refrigerating while my brown rice cooks (I made enough brown rice to last for a few meals, so I'll turn it into sticky sushi rice later). In the meantime, I coated the bottom of an 8" pan with olive oil and 1/2 tsp of blackening powder and turned on medium heat before cutgin the rest of the steak (13 oz remaining) into 1/4"-1/2" wide inch-long strips. Once sliced, I placed in the pan and allowed to blacken.  Once blackened and cooked, I divided into thirds (a little over 4 oz each), mounded on a plate, topped with two tablespoons of the mango peach salsa, and surrounded with tortilla chips. When eating, I used the chips as scoops and ate utensil-free. 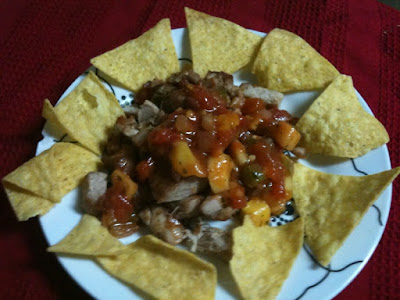 I also made two spicy tuna rolls afterward using brown rice; first try with brown rice... the taste was fine, but the rolls didn't stay together very well. Not very pretty as you'll see, but looks aren't always everything. Spicy tuna rolls are some of the healthiest rolls out there, although sodium can be high depending on ingredients used (mine of course is low sodium).

Really good!!! I forgot how much I love spicy tuna and how easy it is to make. I used 3 oz tuna cut into 1/4" cubes, with a green onion diced, and a splash each of rice wine vinegar, sesame oil, and soy sauce + a tablespoon of  sriracha sauce. Then using my sushi mat, I spread the rice on the nori, place the tuna mix near the top and roll up. Then slice and serve. I didn't even need soy sauce or wasabi because of the extra sriracha. Very tasty. 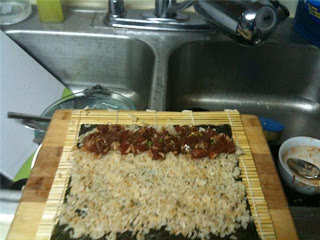 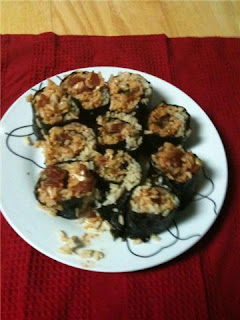 Also I learned that not all things that can be ground up by the disposal should be ground up by the disposal as they don't go down the plumbing. I've learned that I can also be a plumber extraordinaire, as I took apart the plumbing underneath the disposal and pulled out the remains of my chopped off ends from the tropical flowers I bought today. The things I never thought I'd have to do, but have I mentioned that I can't wait until my husband is home to take care of little things like that?
Posted by Unknown at 5:17 PM