Awesome foods that I've made in the last week:
I've learned that cilantro may be my favorite herb and flavor and I love the way it smells and tastes. I especially love how my hands smell after chopping. Hopefully I can perfect all of these awesome recipes in the next few weeks. I cannot wait to make for Klark!
Posted by Erin Pennings at 7:13 AM Links to this post 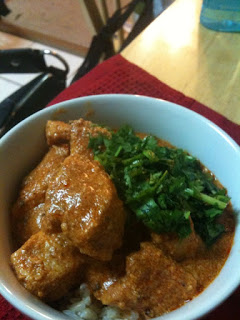 Posted by Erin Pennings at 7:50 PM Links to this post

The other night, I started looking through all of our seasonings, spices, sauces, and miscellaneous ingredients... and was shocked (that word seems to be finding it's way into my writing on far too regular a basis) at the sodium content of so many of them. Yes, when I've cooked, I've generally cooked healthy, but rarely, if ever, considered the sodium content of the ingredients.
Unfortunately, because of all of the soy sauce we've used in marinades, we bought a giant Costco-sized container of soy sauce that just might last us a lifetime. Rather than throwing out something that's perfectly good (and given the salt content, will never expire), we'll continue to use it and all of our other higher sodium product listed above until they either run out or expire, although we'll start to phase them out and temper their use.
I think Klark is a little worried about what this new gameplan means to him. Hard to tell when we get two sentences in on Yahoo messenger before his connection dies and it's a day in between blurbs; mostly I think he's excited to have real food, though. I did explain to him that it's not about not eating our favorite foods, but it's about lowering their sodium content when available. Already, products with more salt are starting to taste too salty to me, which speaks to how much removing something from your diet can make you more sensitive to it (case in point, me and milk).
Also, it should be noted this is something I'm doing by choice. My doctor hasn't given me a number to hit, but rather this is something I'm doing by choice -- and the more I learn about how much excess sodium is in Western diets, the more I'm glad I'm doing it. When I go back in a week, I hope that my blood pressure will be lower, but if not, I'm just starting on this journey and plan to stay on my path, regardless of blood pressure. I will rule it though and not let it rule me -- I refuse to look at something that I love (Annie's Mac & Cheese) and not ever eat it again, just as I refuse to stop going to eat at friends' houses or at restaurants like Olive Garden -- it's about being smart; and, if I pick something that contains more sodium, then I'll be more careful for the next few days. I will still be going to the Melting Pot to celebrate my birthday!!!!
Posted by Erin Pennings at 6:45 PM Links to this post