Labels: dinners, snacks
I've been a busy little blogger this week. You can now check me out on Facebook and Twitter, subscribe via email, and of course, Follow (the yellow brick road?) me. Granted, you've been able to do this for a while. But, now you can do ALL of the above using the options to the right of the screen. It's a big accomplishment for me. Don't knock it.
Hubby and I have been planning a date night, but we're trying to reign in our spending habits (champagne tastes, soda pop budget). So we made an uber-gourmet meal at home tonight, and instead of going out to watch UFC, we're renting it on pay-per-view at home. Ultimately, not a lot of cost-savings there, but, we come out ahead because we've got everything else we need here, food, drinks, front row seats and NO background noise to detract from the fights. Unless you count the howling of Jack the cat. 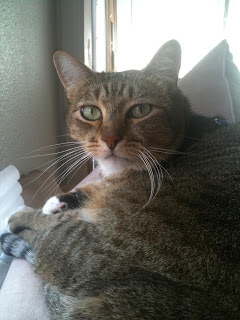 He seriously howls. I've never heard anything like it from a cat. He was a rescue from a family whose other kitties literally tried to feast on poor Jack. So he lived in a kennel and howled for attention -- and wound up with a set of overdeveloped lungs. Poor little guy. Now, poor big guy. My 12 pound cat. And he's mad in the photo above. I did, after all, disturb his one of his two daily 11-hour naps. I shouldn't complain, he's a good little guy and he's been a good friend to me over the last seven years.
Back to date night.
The Plan:
The Entertainment: UFC 118 -- Edgar vs Penn
The Company:
To make the almonds is really very very simple. Yet so good. You need:
Almonds (duh)
Olive oil
Sea salt
Butter
Cayenne pepper
A stove top
so easy, I know you can do it. It was one of my first "discovered" recipes -- it came from a bargain cookbook from Borders. Though it's been so long that I can't remember exact measurements. Here's what I used today and it worked... smashingly. Crunchingly? Deliciously? Yes. Deliciously
The results were delicious. 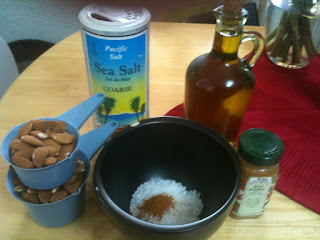 Mix 2 tbsp sea salt and 1/2 tsp cayenne in a bowl and set aside. The sea salt should be coarse but not in giant chunks.
2 tbsp butter and 4 tbsp olive oil in a frying pan and heat till rippling. Add 1 1/2 cup almonds and toast until a lovely golden brown. Careful and don't walk away, because it's a fine line between perfect and crispy. And we don't want crispy 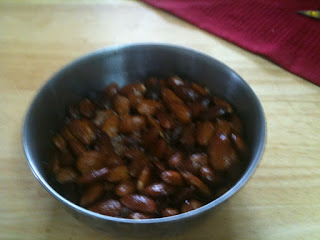 Mix almonds in with the salt/cayenne mixture till evenly coated then set aside to cool.
Now, EAT. If you don't eat them all, you can store them for several days.
If they last that long. I'm betting they don't.
Next up.
What we've all been waiting for -- FONDUE! Yum. Yum. Yum.
Tonight, I tried a new recipe from BestFondue.com. With a name like that, how can it not be amazing? Really. I want to know. Still, being me, I had to modify it.
Cheese fondue, in my opinion, is far better with a few diced scallions or green onions. A handful or so.
1/4 cup unsalted butter
2 medium tomatoes, washed, peeled, seeded and sliced (peeled? no way!)
3 cups American cheddar cheese, grated (American? how about Irish! we used a great Irish white cheddar with a few chunks of Velveeta for color and creaminess)
1 tbsp cornstarch
1 oz ranch seasoning mix
1/2 cup dry white wine (wine with low residual sugar -- Sauvignon Blanc works well)
1/2 tsp pepper

1 tsp horseradish to taste (next time we'll use more, but you can use any hot sauce)
The recipe calls to pre-cook everything over low heat on a stove.
No way.
I'm not a huge fan of doing dishes, and never have been. But, I'm less a fan now than ever, since we don't have a dishwasher. No, I bought an electric fondue pot for a reason. Easy to clean, easy to use and a one pot meal. If, however, you don't have an electric fondue pot, or a fondue pot at all, or you're not adventurous you like doing lots of dishes and LOVE your brand new dishwasher, you may want to follow the recipe exactly.
Not my cup of tea. Or my cup of cheese. I will say, it's best to have all of the ingredients prepared ahead of time. I learned the hard way on my first homemade fondue. And fondue isn't about stress. It's about leisure.
And calories.
Seeding and dicing tomatoes is hard work. I'd never seeded tomatoes before. Peppers, yes. Tomatoes, no. Okay, I'm being dramatic, it's not hard at all, but it is tedious and time-consuming. 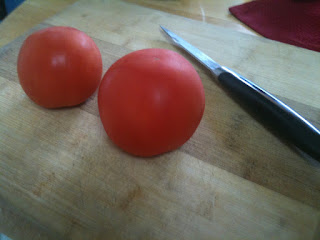 Wash them and peel them (yeah right! There is NO way I'm peeling tomatoes). Wash them. 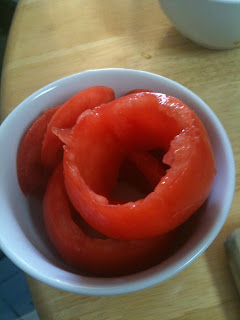 Then cut off the tops and hollow them out. And if you're like me and don't consider using a spoon until you're writing about it, you cut the bottoms off as well. 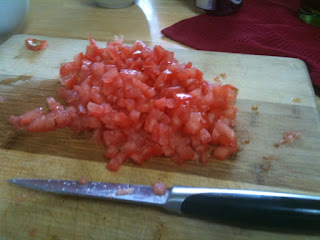 Then slice into tiny slices (julienne) and dice. 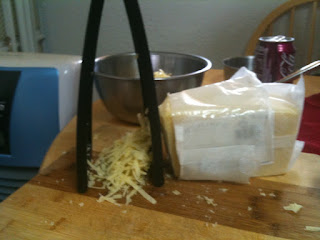 Grate the cheddar. I love this Irish white cheddar that I've discovered at Costco. Mix the cheddar with cornstarch and set aside
Final prep work is to dice up a single green onion for color and for a smidge of flavor. That's a technical term, "smidge." 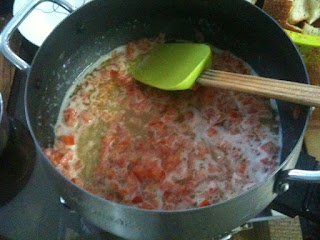 First, on a low heat setting, melt the butter. Add the tomatoes and brown for a few minutes. 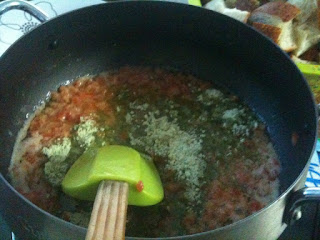 Now, mix the ranch seasoning mix with the tomatoes. Well. Mix it well. 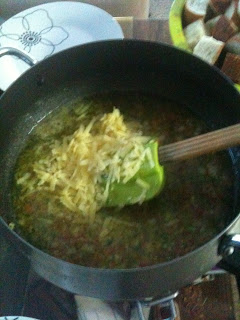 Next add the cheese -- slowly. One handful at a time and let it melt. 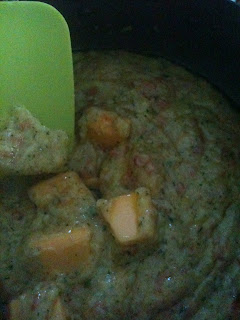 We decided that it wasn't melting as smoothly as the American cheddar cheese the recipe called for. So we added a few chunks of Velveeta, and added some lovely yellow color. 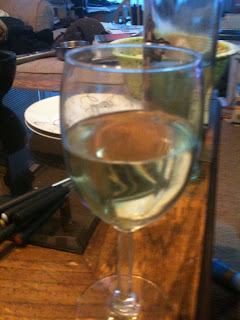 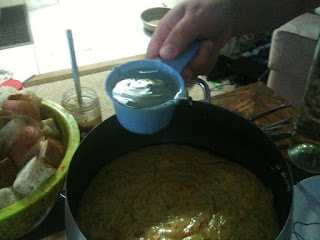 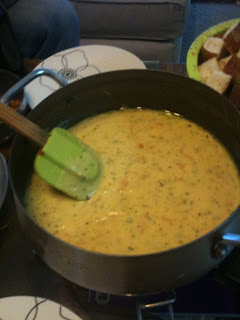 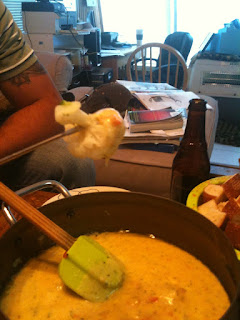 Eat! (stir occasionally to make sure it doesn't burn at the bottom)
Dippers: 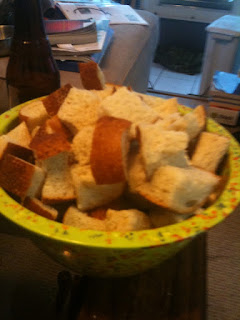 chunks of a nice Italian bread. One day I'll bake my own breads. That day has not yet arrived. 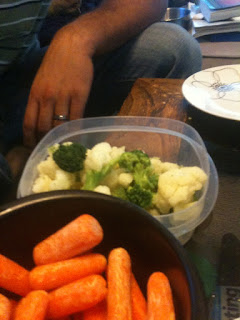 raw carrots and steamed cauliflower and broccoli
next time we'll use green apples, we just forgot 'em this time.
Now on to UFC. It's just starting now...
Whew! GO PENN, GO COUTURE!!!
NOW, I can drink the wine!
Hopefully, Klark's forgiven me for spending some of date night writing! :)
Have a great weekend, kids.
at 5:34 PM Posted by Erin Pennings