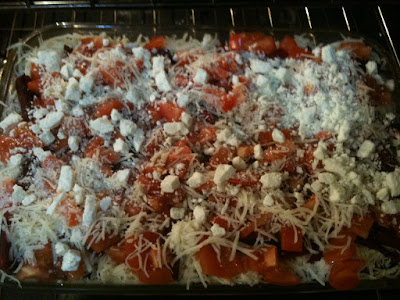 K and I were finally both at home and with energy simultaneously... and we got the final box out of our downstairs! We reorganized the furniture and hung pictures... and it's boo-ti-ful. A few odds and ends and clutter to find homes for still, but it's coming together so nicely!

With that huge success behind us, I thought we should celebrate! By celebrate, I mean cook at home, and by cook at home, I mean another fabulous experiment with the CSA veggies.

I've had some awesome spaghetti squash in the freezer that I cooked and made into "noodles", just like I did when we made eggplant parmesan over spaghetti squash last fall. Cooked squash "meat" keeps really well frozen if your physical squashes are nearing the end of their storage lives. Though I've found that I love my garlic sauteed rainbow chard, since I've gotten a chard bunch each week from Glacier Valley CSA, I've been wanting to try some new ways to eat it.

Born of ingredients in the fridge, my creative juices, and my husband's input, I give you a fantastic meatless meal... one even approved by K, the penultimate carnivore. To his credit, he only once suggested adding meat, and this was early in the planning stages. We added lots of cheese in homage to his Wisconsin-cheese-loving roots, and to give a nice meaty texture and earthy flavor, we added some sliced crimini mushrooms. Though the final product was a bit on the juicy side, it was fantastic... a wonderful success.

If you don't have frozen spaghetti squash, it's best to bake your squash ahead of time and "noodle," then set it aside to cool. It's much easier to work with when it's not scalding.

Rinse the chard, slice off the stems and slice out the center ribs and set aside; next slice the main leaves into large chunks -- about 2" wide. Slice the garlic and cook in pan with vegetable oil until golden. Just as in Sauteed Garlic Rainbow Chard, add the sliced leaves a handful at a time, until slightly wilted. Set aside. Now saute the stems until crispy. Turn off heat in pan and begin your lasagna. 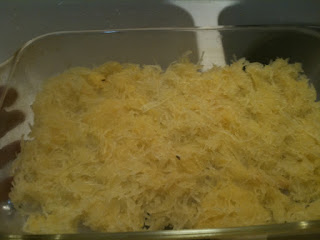 In a 13 x 9 greased pan, first layer 1/2 the spaghetti squash. (While I await the unearthing of my camera charger, I sadly am limited to photos from my phone... some good... some less so. My apologies) 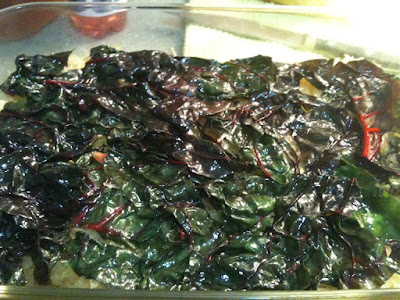 Next is the chard; unfurl the wilted leaves (1/2) and spread across the squash. 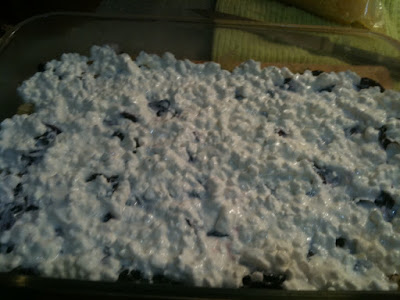 Add in the cottage cheese. All of it. 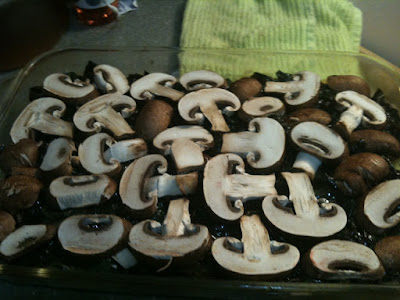 Repeat the squash and kale layers. Cover with the sliced mushrooms. I wanted to dig in right here without the rest of the toppings and without cooking it. It looked SO pretty with these babies. 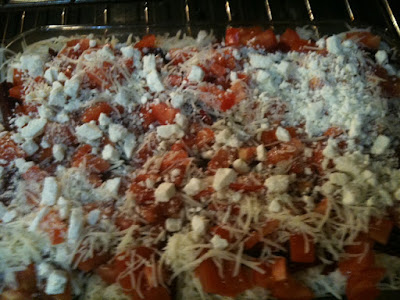 Next, cover the sliced mushrooms with 3/4 of the mozzarella, reserving the remaining quarter for the very top. Cover the mozz with the chard stems and the diced tomatoes, finally covering the top with the mozz and feta.

Cook in preheated 350 degree oven for 30 minutes; if your oven cooks unevenly, cook for 25 minutes and then turn for remaining five. 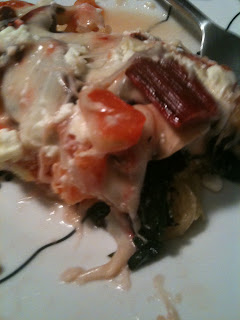 Serve. Super yummy and husband-approved. The mushrooms really make this dish! Because it's a little on the juicy side, the final picture doesn't do this dish justice!

This is linked up with Meatless Mondays/

Posted by Erin Pennings at 9:35 PM