Klark says that I am his little tomato, because I love them so much, but after canning and roasting nearly 25 pounds of tomatoes today, I'm not feeling so positive toward them. I fully intend to wake up tomorrow a new woman with my love of tomatoes restored!

We made three kinds of sauces/soups today, which we then canned.

I fully intended to plant tomatoes and an herb garden this past spring, but I lost steam with all of the preparation for Klark returning home. 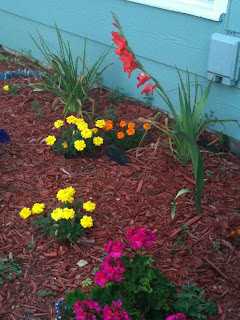 Instead I have a beautiful garden, but have had to buy my own cilantro, parsley, basil, and... tomatoes this year. Which I'm completely fine with most of the time. Less tending, less work... but also less convenient.

Two years ago a friend of mine purchased a giant box of tomatoes and canned them. I was completely inspired and in total awe.

In the last few weeks, several blogs that I follow have been posting about their tomato bounties and the ways in which they were using their tomatoes. Sauces. Fresh recipes. Oven "sun-dried".

I think you can guess where this is going. 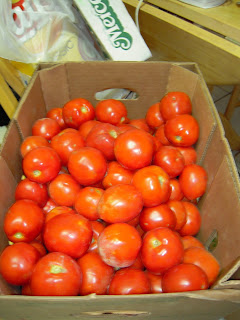 Today at the Farmers Market, the giant boxes of tomatoes were back. Of course we had to have one. Make that "I" had to have one. Klark had a great attitude about the whole thing, and even volunteered to lug the 25+ pound copy paper sized box back to the car. Thank goodness we drove instead of walking from the house.

Then we bought some quart sized mason jars.


The cooking began. We planned on making one batch... only needing to make one batch of tomato sauce. And even though the recipe said it would reduce down, we were sure we'd need more than a dozen mason jars for canning. 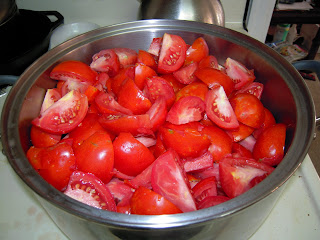 I quickly learned that the box held considerably more than 6-8 quarts of tomatoes (try at least 4 times that!) since the photo above is just about 6. 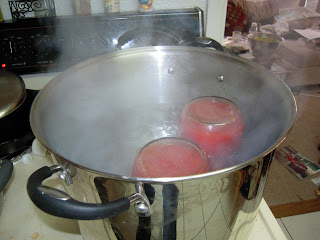 Ha ha. Joke's on us. As I saw that the first batch (approximately six quarts of tomatoes) only was going to yield about two quarts of sauce, I changed plans. What was originally an afternoon endeavor, quickly became an ALL-day event. 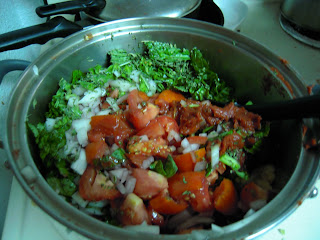 The first tomato sauce was really smooth, so I wanted to try something a little chunkier for the second sauce. I also wanted to add some basil. I bought a lot of basil today. Basil is my new cilantro. Except that cilantro can't really ever be replaced in my heart.

I especially was more interested in chunky when I learned that the best way to make the smooth sauces correctly was to press them through a strainer. I really hate pounding a chunky material through a fine strainer. So, following the pattern of lazy cooks everywhere, I cheated. I poured the material into a blender about a quart at a time. Time consuming yes, but less tedious than simply pushing through a strainer. Highly recommend this for all. 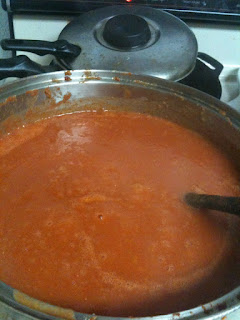 The third sauce is actually a soup, and comes straight from my mother-in-law, who says it's straight from her neighbor. Klark says it's straight from amazing and he loves it. Lots of veggies, and more blending for straining. Lots of blender explosions though... if you decide to cheat like we did, make sure to use your industrial strength muscles to hold the top on the blender... and try using small pulses until it blends better.

Some kind of amazing.

I haven't had more than a taste, but I LOVE it. It's worth the hard work. 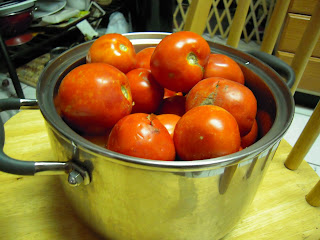 After finishing the soup, we had another 6 or so quarts remaining. Though 7 hours had passed since returning home with all groceries, I decided to try one more -- using the oven to "sun-dry" the tomatoes - Thank you to Heather at Gourmet Meals for Less for the idea. 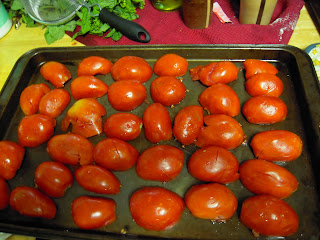 There are still tomatoes left, but I'm not touching them tonight. Frankly, I may not finish the roasted tomatoes tonight, but will simply shut off the oven before bed and turn it back on in the morning, using Colorado's exceptionally dry air to my advantage.

I promptly collapsed and haven't moved too far since. Only in the last few minutes have I had the energy to pick the laptop up to start typing. Though the score is almost Erin 4, Tomatoes 0, it's been a fierce battle. Nearly 8 quarts of canned material later, I am feeling a little smug over my first canning experience since I was a little girl who "helped" my mom make strawberry jam. 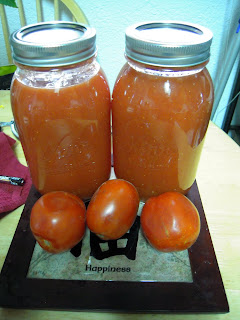 Recipe #1: Smooth Tomato Sauce
6-8 quarts tomatoes
2 tbsp lemon juice
2 quart mason jars
Simmer tomatoes for 20 minutes or until mostly liquid and somewhat mushy. Remove from heat (water for hot water bath should be boiling and mason jars should be sanitizing away). Strain liquid and return to pot. I made this step easier by blending the sauce a quart at a time and straining. Simmer until remaining liquid is reduced by half. Seal the jars and give appropriate hot water bath treatment (dictated by your altitude -- in Colorado, we have to do a one hour hot water bath for quart jars). 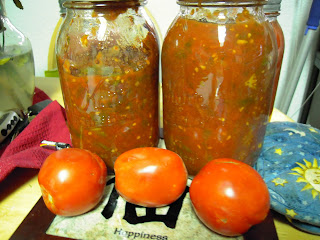 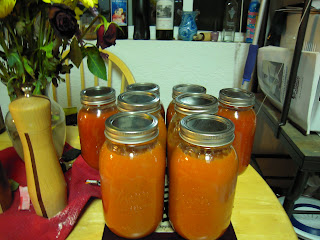 Lots of tomatoes (any size, though similar sizes should be grouped on separate cookie sheets as they will dry at separate rates)
Drizzle of olive oil

Now for the tough part. Slice the tomatoes in half, and squeeze some of the liquid and seeds into a bowl. Place the tomatoes meat side down (skin side up) on a cookie sheet. Drizzle with a small amount of olive oil. Set your oven to its lowest setting and place the cookie sheet in the oven. This will take 5+ hours depending on the size of tomatoes. In the final hours, turn your tomatoes skin side down so that they dry on both sides.

Enjoy. Shout outs and gigantic to the lovely ladies who've provided me with inspiration and who have provided recipes for trying. So delicious. So good. And, yes, straight from amazing. Perhaps more canning coming in a few weeks. Once my feet have recovered!
Posted by Unknown at 8:27 PM