We had a going away party last night. We planned it back when next week would have been our last week in Colorado, as a way to get rid of food and spirits that we didn't want to take with us to Texas. Even though we've still got another month and a half before we pick up and start moving, we decided to have the party anyway, and, order the UFC fight (still can't believe Lesner was out in less than five minutes). We made some amazing Chicken Bites in three flavors: Frank's Buffalo Sauce, Teriyaki, and Barbecue - one day I might share Dad's amazing bbq sauce recipe with you, maybe. We marinated in sauce overnight and had some wonderfully flavored bites. I love using ziploc bags to mix sauces and marinades... and to use as a marinating container.


We've also had half of a butternut squash asking to be eaten since I made Butternut Squash Soup last week. Not having any sweet potatoes, I thought, HEY let's make some Butternut Squash Fries. Sounds great, right?


In fact, the flavor was phenomenal. 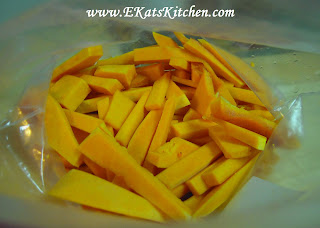 I had some lovely little fries cut from the squash. 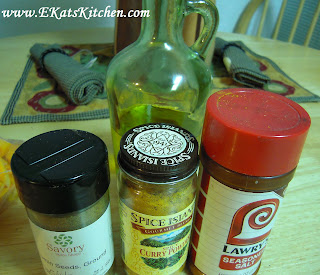 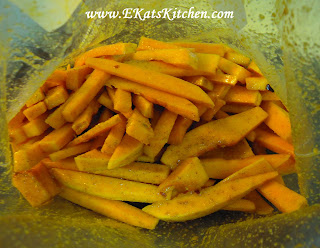 I spread them in a single layer on a cookie sheet and baked at 350 for 35 minutes.

I scooped from the cookie sheet .... and got a giant pile of mush! Very delicious mush. But not so appetizing in appearance. What a bummer. I didn't even take a photo!


I still set them out, but got lots of surreptitious "Hey, Erin... what's that?"


I'm not sure why they didn't crisp up, but suspect it's due to squash's tendency to soften SO much. I was too worried to let them bake and potentially soften even more. I still ate these delicious munchies.... though they weren't so crunchy.


Oh well. I was going to let this disaster go quietly into the night, but just today, via Alex @ A Moderate Life, found this awesome blog carnival called Food Disasters, and it is with great pleasure that I link this post.
Posted by Unknown at 5:56 PM