Chocolate and beer and chiles, oh my!

Who wouldn't fall in love? 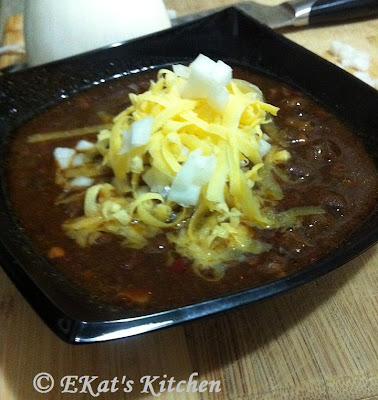 As I thumbed through The Homesick Texan Cookbook, I marked recipe pages with my fingers that I was in love with and wanted to try. Soon I was out of fingers.

The world for a sticky note!

I had to start narrowing down my pick for Week 3 of the Cookbook Spotlight and Cookoff. Would it be the Radish and Cabbage Slaw? The Seven-Chile Texas Chili? The Queso Cookies? Tortilla Soup?

I kept coming back to the Seven-Chile Texas Chili.

Fall is definitely arriving here in Alaska; leaves are changing, crabapples beg picking, and the night air is bone-chilling cool, even when the days have a little warmth to them. To top it off, K has been moose hunting (and I sure hope I get to blog about moose recipes soon), and when he's home, I would sure love to have a hearty meal to warm him up.

Did I mention I kept coming back to the Seven-Chile Texas Chili? The only potential problem I faced was that it takes about half a day to make, which meant that I couldn't cook it while I was at work, so the One Hour Texas Chili was tempting. I persevered and opted to go with the whole shebang. I mean, why not?

I ran into a few snags when I couldn't find some of the chiles, but life is about improvisation and I really wanted to try this tasty treat. You'll find my substitutions below, and I think you'll love this dish too.

Remove the seeds and stems from the dried chiles and toast the dried peppers for 10 seconds on each side in a dry skillet. Cover with water and leave heat on until the water starts to boil. Then remove the heat and let soak for 30 minutes.

Cook the bacon in a deep skillet or dutch oven over medium heat until done. Remove from the pan to a plate covered with a paper towel. Brown the cubed beef in the bacon grease and remove from the pot (this may need to be done in batches). In the same pot, cook the onions until translucent (about 5 minutes), then add the garlic for another 30 seconds or so. Add the beef back in.

Here, because I did have to leave the house to accomplish a few things, I transferred everything to my 6 quart slow cooker and turned to high.

Add all other ingredients except for the masa harina and the cheddar and onion garnish. While waiting for the chili to boil, combine all peppers in a food processor with a cup of water and process until a thick paste. Add to the chili.

The original recipe calls for turning the heat to low when the chili begins to boil, and simmer uncovered for 5 hours. Because of my slow cooker alteration, I covered the chili during its first 3 hours of simmering, and checked periodically, adding water and adjusting spices as needed.

After five hours, scoop out 1/4 cup of broth and mix with the masa harina; pour the mixture back into the pot and stuir until thickened. Simmer another 30 minutes. When done, serve with the cheddar and onion garnish.

This is some tasty chili, with a perfect bite! 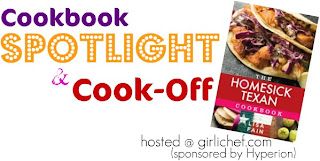 This post is part of The Homesick Texan Cookbook Spotlight and Cook-Off sponsored by Hyperion and hosted at girlichef.

Here are the recipes that my fellow cooking adventurers tried this week: