How to Cook Pumpkins and Other Squash

I also had no idea that they were related to pumpkins or that they could often be interchanged with pumpkins.  Nor did I have any idea how to cook them!

I'm going to assume that some people are starting where I did, and don't know how to cook a squash. Here is your how to guide... for spaghetti squash, for meatier squashes, and for pumpkins and squash to be made into pies and other sweet treats.

I showed you these photos of my squash bounty from the Farmer's Market a few weeks ago.
Squash-a-palooza, like it's concert festival forebears, has gone on for more than just one day.

Day 1 featured spaghetti squash and pink banana squash.
Though spaghetti squash can be baked, my favorite way to cook it is by boiling; this makes the "noodles" less crunchy and softer... and therefore is a great way to make the squash serve as a gluten free replacement for traditional pasta.

To boil spaghetti squash, make fork holes in the squash, plop the squash in a large pot of water and boil on high heat for at least an hour. Make sure that your squash rotates in the water, otherwise you'll end up with half soft noodles and half a little crunchier. After allowing to cool, slice in half and scoop out the seeds and fibrous innards (be sure not to take too much out, as the "noodles" will be easily scooped out with the innards). Then drag a fork through the meat to create noodles. Either set aside for dinner, or place in freezer bags and freeze for use later.

I know I showed you this banana squash, but it's truly a beast and deserves to see the light again. Twenty-three pounds of squash!!! Though the farmer offered to sell me this baby in chunks, I wanted to buy the whole thing so I could stock up my freezer. K won't let me buy more squash now. :( Understandable, but still makes me sad. I could eat and buy and prep squash for ages!!

This baby got chopped into half, and then half again, and then half yet again! Yes ... eighths. It was that monstrous. How do you cut a giant squash in half? VERY CAREFULLY!

As the chunks of squash became manageable, I then scooped out the goop and seeds from the center. I saved the seeds for roasting, and then forgot about them in the oven. Whoops!

To cook this monster, and most other squash, season the "meat" with salt and pepper, or whatever other seasonings you want, (or you can skip the seasoning step altogether if not sure what you'll be using the squash for), and then place meat-side down in a lightly greased baking dish.  Bake at 350 degrees for about an hour or until squash meat is very tender and can be easily pierced with a fork.

Pull out and cube, setting aside for your dish of choice, OR place in freezer bags to freeze and then cook later. If freezing, it's worth noting that your squash upon thawing may be best suited for use in soups or purees.

Fast forward a few weeks, when I was ready to tackle squash again. It really did take a while! The 23 pound banana squash and two giant spaghetti squash took a lot out of me! It's now time to bake some sweet treats using the sugar pumpkin. 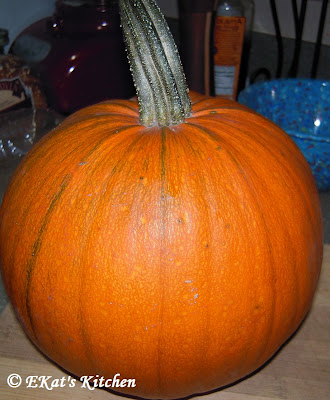 What's a sugar pumpkin? Honestly? I have no idea. It's a small pumpkin that came to us very green. After several weeks on the counter, it turned a brilliant orange and just screamed to be turned into something delicious. I've been watching Pinterest and Friday Potluck for the best pumpkin sweet treats on the net and opted for Pumpkin Cheesecake Cupcakes from Little Rays of Sunshine and Spiced Pumpkin Chocolate Chip Cookie Bars from From Apples 2 Zucchini. Watch for my versions of the recipes to come soon.

How to cook a pie pumpkin or sugar pumpkin.
Slice the top off and then slice in half. Enjoy the beauty of a gorgeous pumpkin. Scoop out the pulp and seeds. If you wish to save the seeds, you can do so (rinse the seeds and dry with paper towels, then spread out in a single layer of a cookie sheet, seasoning with salt and pepper and put in oven on low heat for a few hours... be sure to check regularly!)

Place the pumpkin halves meat side down on a cookie sheet and cook at 350 degrees for about an hour until the meat is tender and can be easily pierced with a fork. Scoop the meat from the shells and push through a sieve to reduce the amount of water in the pumpkin. Then place in a food processor and process until smooth. Set aside and start cooking!!